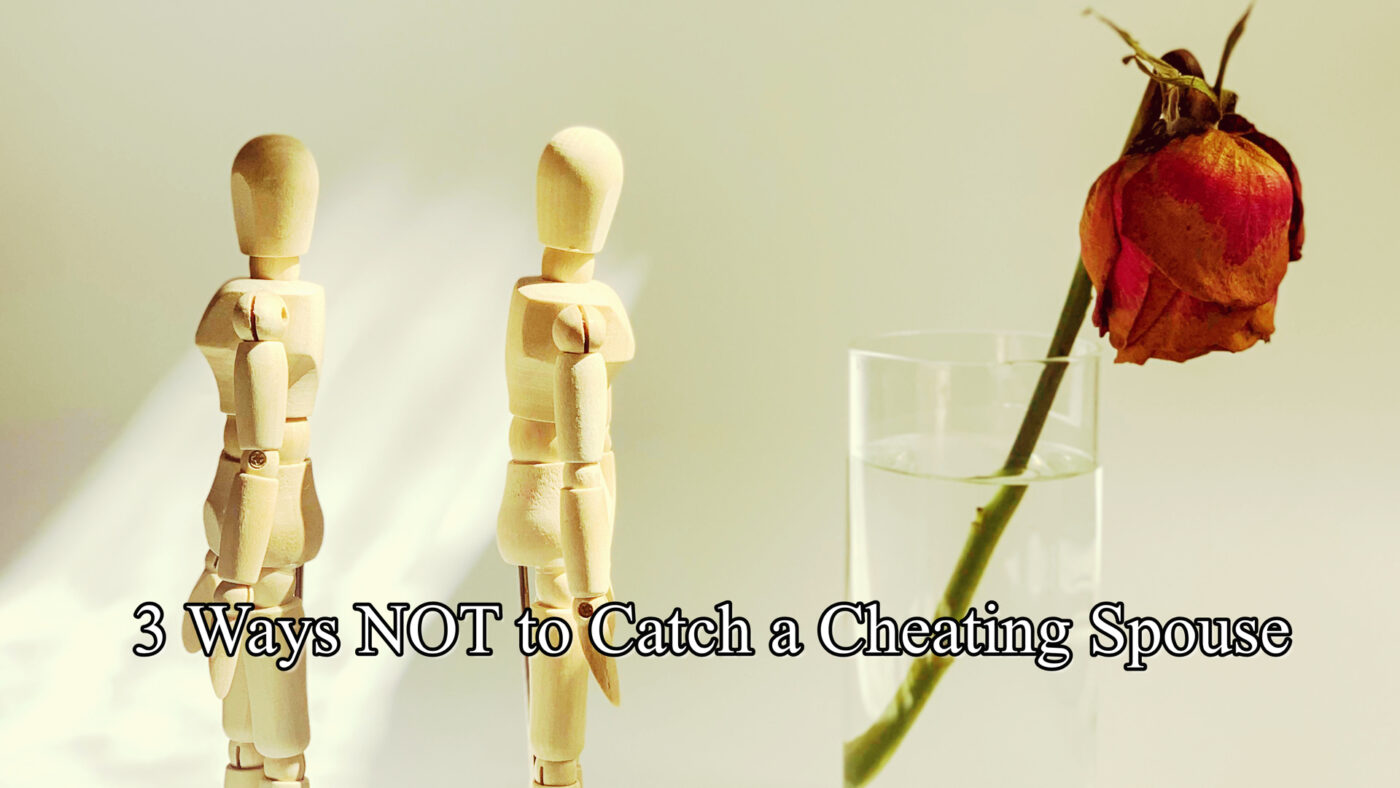 If you’re reading this article, you’ve probably already read several how-to’s about how to identify a cheating spouse. But you should equally pay attention to a few things you shouldn’t do, as well.

If you can manage to avoid these three behaviors:

– you will stand a much better chance of turning things to your favor in the end, especially if you end up in court as part of a divorce action.

Let’s examine these in detail to see just how dangerous they can be for your case if you’re dealing with a cheating spouse.

If you indiscriminately follow your spouse all over town, even if you think you’re being selective about it, you’re only too likely to give yourself away. Even if you’re good at hiding from your partner, somebody else might see you.

Not only that, but you have no training in surveillance tactics or methods. We’ve had cases where our clients have gotten into serious traffic accidents because they were following their spouse.

This is especially dangerous when you suspect your spouse is cheating but you don’t know with whom. There’s a good chance that the other person knows you and might make you out. It’s also possible that your might be seen by your partner’s friends or family, who could unwittingly tip them off!

2. Demand that his or her friends or co-workers tell you what’s going on.

Demanding anything from your mate’s friends or co-workers–especially something that puts them in a very awkward situation– is not likely to ingratiate them to you and can make your job all that more difficult. Plus, they’re likely to tip off your spouse that you were nosing around.

If you feel you absolutely must talk to one of your spouse’s friends or co-workers about this, be careful who you choose. Keep in mind that the person you ask may feel it in their best interests to tell you that your husband, wife, or significant other is having an affair when in fact they are not. After all, this “friend” of your partner may have designs on your partner–or you!

There’s an old saying that says, “Loose lips, sink ships” and nowhere is this more true than in the case of a cheating spouse. Keep your cards close to your chest and only confide in family member you know has your back in a situation like this.

You are not (currently) smarter than them

3. Act as though you KNOW they are cheating, and accuse them, in hopes that they’ll finally give up and admit it.

Confronting someone about their infidelity is a tactic you use when you’ve had enough and you either want them to either work things out with you or get a divorce. But it is NOT an information-gathering tactic!

This is only going to let your spouse know that you are scoping them out to see what’s going on–and this tactic will let them know to be more careful in how they sneak around. It might even tip them off to the fact that they’ll need a lawyer soon, destroying the leverage you could have if you confronted them once you had proper evidence.

Worst of all, your spouse might actually not be cheating. You could end up wrecking or, at the very least, severely wounding your relationship if you use accusations as an information-gathering tactic.

Accusations are a no-win tactic.

If you want to to have a no-obligation discussion with a professional, caring private investigator who can share the answer to “3 ways not to catch a cheating spouse”, then just call (800) 867-3930 and speak to someone who will be happy to answer any questions you have. There’s no obligation. If you are looking for an affordable licensed private investigator in Atlanta with 20 years of experience assisting individuals, attorneys and corporations feel free to contact us here. You can also view a portion of our extensive client list here, and see here what actual clients say about Eagle Investigative Services a private investigator in Atlanta, Georgia.
Scroll to top
Title
No Title
Description
No Description